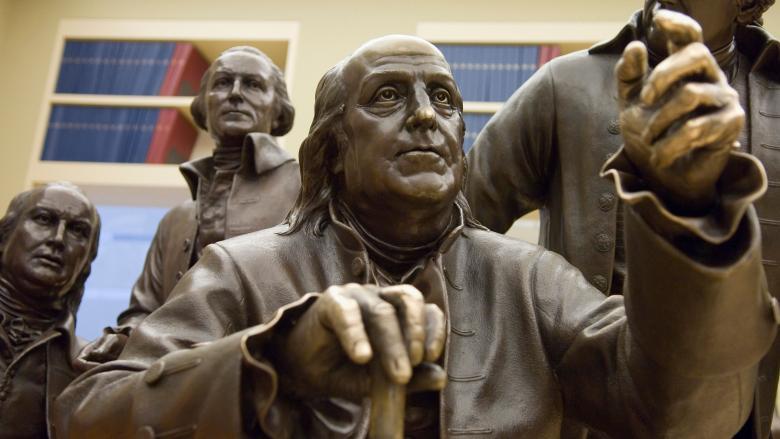 When newcomers arrive at this site, they are often surprised to find that a thing called employee ownership exists at all. And since it is new to them, they often assume it is…new.

In fact, enabling employees to earn and hold a stake in the company where they work is a central element of the American economy, dating back prior to the founding of the United States.

Benjamin Franklin pursued a form of employee ownership as early as 1733, when he sent the first of many journeyman employees to various cities to set up new print shops. Franklin paid for the shop’s upfront capital costs—which were significant, since most of the equipment had to be shipped from England—and covered one third of the expenses. For the next six years he took one third of the profits; after that, the journeymen could purchase the equipment from the profits they earned and own the business.

As with some modern employee ownership options, employees earned their shares in the business through sweat equity—which was much more readily available to them than cash.

“Most of them did well,” Franklin wrote in his autobiography, and at the end of the six-year term many were able to “go on working for themselves.”

Giving employees a chance to own shares in the businesses where they worked also was important to George Washington, Thomas Jefferson, and Alexander Hamilton. All three agreed on one of the American government’s earliest legislative actions—providing a tax break to help rebuild the New England cod fishing industry, which had been decimated by the Revolutionary War.

But the three Founding Fathers also agreed there had to be a catch: Federal assistance would be available only if employees shared in the profits.

Jefferson and Hamilton were political adversaries who rarely agreed on anything. Yet the concept of economic fairness—one central to the Revolution itself—was powerful enough to cause them to join in support of a plan that gave employees an ownership stake.

By the mid-19th Century, the U.S. was transitioning to an industrial economy, and leaders of nationwide companies (including Procter & Gamble, Railway Express, and Sears & Roebuck) recognized that long-time employees might end their working careers and wind up with no means of income. So those leaders set aside company stock to be given to employees upon their retirement—again, giving them an ownership stake based on their efforts.

When the U.S. launched a federal income tax on all citizens in the early 20th century, one of the biggest debates involved how to treat stock that employers set aside for their employees. The treatment Congress adopted set the stage for the formal development of employee stock ownership plans more than 50 years later.

But before that happened, someone first needed to enter the scene, and that person was economist and attorney Louis Kelso. In the 1940s, Kelso shared with the world his concepts for distributing capital more equally. The absence of such capital, Kelso felt, was a key cause of economic inequality in general and of the Great Depression in particular. Too few people had access to capital that could help them earn a living, said Kelso, who developed new ways to share capital more fairly employees.

“Capital is too fabulous a thing, too vital a thing, too critical a thing to be owned by the few,” Kelso told Bill Moyers, in 1990, a year before his passing.

Kelso lived his beliefs. He established Kelso & Co., which helped businesses establish a form of employee ownership known as an employee stock ownership plan (ESOP) that Kelso had developed. Kelso & Co. itself was closely held and had an ESOP that shared stock with its employees.

By 1974, instability among employee retirement plans led Congress to take action, enacting the Employee Retirement Income Security Act. The law protects employees who participate in employer retirement programs, and formally established ESOPs—which today are the most common and successful form of employee ownership in America—as a retirement plan.

In addition to ESOPs, there are several other forms that employee ownership can take in the U.S. Employees can own a piece of the business where they work by:

Employee ownership can take many forms, and it has been a key element of the north American economy since before America was America. We see every reason for it to continue growing, until all individuals have a chance to own a stake in the businesses where they work.